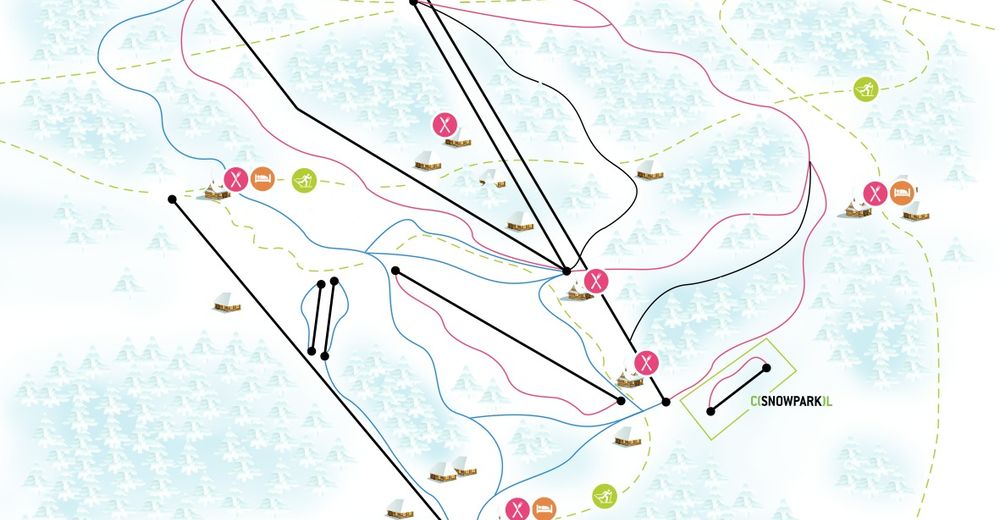 Horní Domky ski resort is located in upper Rokytnici nad Jizerou on the southern slopes of Lysá hora at a height of 657 – 1 315 m above sea-level. It is comparable to the best ski centres in the Czech Republic in terms of size, quality pistes and facilities. It is particularly popular for the variety and size of its pistes which have a combined length of 14.4 km and are up to 100 m wide in places.

A snowboard park is available for snowboard enthusiasts which is equipped with a number of jumps, various obstacles and a small surface lift. It is particular popular among Freestyle enthusiasts.

The Horní Domky resort provides skiers and snowboarders with a total carrying capacity of 7 620 persons/hr. thanks to two four-seater chairlifts and six surface lifts. The Horní Domky chairlift, was erected in 2006 and leads from the corner of Rokytka car-park to Horní Domky to the Lovčenka chalet and also operates during the summer. The second Lysa hora chairlift was erected in 1996 and is unique in that it is the only one in the Czech Republic to enter Zone I of Krkonoše National Park (height 1 315 m above sea-level). Its final station is a starting-off point for the Krkonošská magistrála cross-country skiing trail.

The centre is equipped with snow cannons. If there is insufficient snow cover, Spartak Rokytnice, a.s. is able to cover 90% of the pistes with manufactured snow.

The resort provides other services which are available either directly on-site or in close proximity. These are ski equipment hire and ski services, restaurants, fast food, ski schools, paragliding, mountain rescue, skibus.

Parking is provided at four central car parks (P1-P4). At two of them, the Skibus brings skiers closer to the resort.