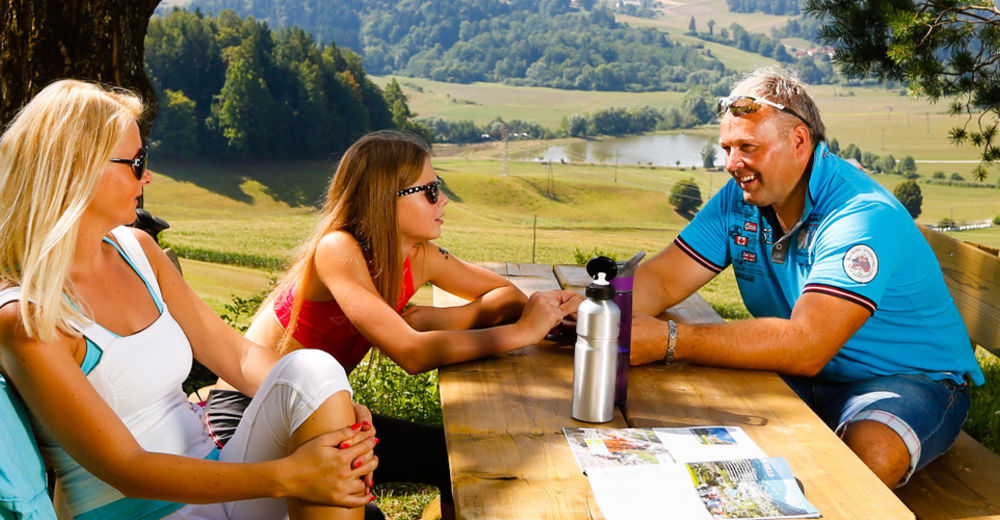 Laško is a pleasant town by the lower stream of the Savinja River. It lies on the 228 m above the sea level, nearly in the centre of Slovenia. The town boasts special natural gifts, rich cultural and historical heritage and variegated cultural, sports and tourist pulse during the entire year . It first was mentioned as a market in 1227, and it become a town at its 700th anniversary in 1972. The settlement of the present Laško riches far back into the history. The old town core is situated below the slope of Hum (583 m), which is a pleasant and a highly frequented tourist point. Laško with its nearby and distant surroundings offers countless possibilities for walks, different visits and excursions. Numerous churches in its vicinity are certainly worth seeing as well as the remains of the Jurklošter Carthusian Monastery. At the end of the Rečica Valley one can admire the masterpiece of the architect Plečnik's atelier dedicated to the bishop A. M. Slomšek. The ethnographically regulated homestead of the famous poet of ballads Anton Aškerc located above the Rimske toplice Thermal Spa attracts the visitors. For additional suggestions visit our web site:

Have you chosen Laško as the destination of your journey, short break or longer stay, as an ideal retreat for you to relax, improve or restore your health? Then you have picked the right place. You will be rewarded with the delights of nature, with rich cultural and historical heritage as well as with the atmosphere of the place vibrant with culture, sport and entertainment.

The origins of the present settlement on the bank of the lower Savinja river stretch far back into the history. The finds evidence the Celtic and Roman colonization, whereas the old town core displays the architecture ranging from the early and late Middle Ages to modern times.
The first written records of Laško go back to the year 1227. It is considered one of the oldest market towns in the Slovenian territory and also the seat of one of the earliest Slovenian parishes. As a borough it was the administrative seat of an extensive principality with market town rights. With the arrival of the first Slavic settlers several geographical locations in the area were named after the original settlers "Lahi" (meaning "settlers of foreign origin") : Lahomšek, Lahomno, Lahomnica, Lahov Graben and the centre of the region - Laško. The settlement itself lost its significance when the area, previously owned by the Counts of Cilli, was inherited by the Hapsburgs. It was only by the arrival of the Southern Railway Vienna-Trieste that the town was awakened from its slumber to see the mining and brewing industry boom as well as the already renowned Roman spa and the new spa in Laško flourish. On celebrating its sevenhundredth anniversary in 1927 Laško was town-chartered and henceforth experienced a more rapid development as a trade, commercial and industrial centre. Today Laško is the seat of the municipality and the administrative unit for 14.000 citizens. Besides curative springs the place boasts pleasant climate and ecologically intact environment.

To the spa for health and relaxation
The Laško spa springs have attracted visitors since the ancient Roman times. The place was frequented by the Roman legionaries, in the Middle Ages by missionaries, to then at the end of the 19th century become a popular summer resort, regularly visited by the Austro-Hungarian emperor Franz Josef I.. And they were all coming for health.

Today the spa (or by its full name: *Wellness Park Thermana*) is famous for its quality health services. The hot spring (32-35 C), a natural source of healing, with its cosy warmth soothes pain and eases movement, this, of course, in combination with a variety of therapies, rest cure, beneficial change-of-environment effect, walks in nature, health-conscious nutrition and highly professional staff, ready to lend ear to any problem the guest might be having. All this helps create favourable conditions for invigorating the organism and enabling the body to itself soothe or even conquer a disorder or disease and in its way restore balance within the organism.
Various outdoor thermal pools with children's splash pools and sun terraces, indoor thermal pools, massage rooms, sauna centres, fitness studios with cardioline, health and beauty centres and salons, pedicures, luxury cubicles, baths and therapies and all other facilities are functionally integrated into the Wellness park complex. For more information: www.thermana.si/en/

The town and the brewery
The brewery, with its beginnings in a small mead and honey shop going back to the year 1825, is considered one of the two economic pillars to the development of tourism in Laško. After the Second World War it developed into one of the most advanced breweries in Europe and is at the same time classified among the major advanced producers of beer and soft drinks as well as major filling plants for non-carbonated spring water. The brewers have contributed to the development of moder tourist industry not only by taking on a great deal of the burden of tourist infrastructure but also by keeping open house to organised visitor groups, coming to view their up-to-date production process and explore the museum of the brewery's history over now almost two centuries. The Tabor Castle restaurant, the Hum Hotel - a former cart drivers' inn and the Savinja Hotel, once the borough hospital and the birthplace of the brewery, are listed among such contributions. In this way Tabor Castle and the Savinja Hotel have been successfully and uniquely preserved as monumental buildings.
And about the brewery's product itself: one of the essential ingridients, giving the refreshing drink produced in Laško the quality of such high repute, is the spring water from under the neighbouring hills, a gift from healthy and unspoilt nature. For more information: www.pivo-lasko.si/en/

For a carefree roam or a focused walk
Laško with its narrower and wider surrounding area offers a wide choice of destinations for walks, sightseeing and trips. Should you decide on taking a focused walk, you can opt for an interesting sacral ring path, start at the parish church of St.Martin in Laško, to then continue to a small late-Gothic church adorned with renaissance frescos in Marija Gradec, to the church of St.Christopher with the oldest church organ in Slovenia, to the twin-towered church of St.Michael, overlooking and thus guarding the town. A stone's throw away there is an ancient little church of St.Catharine in Kuretno. You should also not miss the remains of the Carthusian monastery Jurklošter and the monastery church of St.Maurice with the famous belfry - horseman, the the church of St.Hermagoras, perched high up on Javornik, and last but not least, the youngest church within this sacral ring, a masterpiece of the Plečnik school, dedicated to the canonized bishop Anton Martin Slomšek, which is nestled at the end of the Rečica valley.

If you are in the mood for exploring, follow the geological nature trail to Govce. Or visit the ethnographic museum on Senožete above Rimske Toplice in the home of Anton Aškerc, the Slovenian poet of ballads and romances. Should you yet decide on just roaming around, the tourist map of Laško with its environs might nevertheless prove helpful, inviting you to make your way (watch your step) up the 583 m high Hum, forming the steep backdrop to the town. You can also head for the picturesque mountain villages Vrh and Šentrupert, or for the mountain hut and hunting lodge on Šmohor. For a scenic treat the path through the spectacular Gračnica gorge is a must. At the end of the valley the anglers lodge venue at the fish pond on Marof might in summer tempt you to a fishing adventure.

A town pulsating with life throughout the year
The Tourist Society, in co-operation with The House of Culture, the "Tri lilije" Sports Hall, various cultural and sports societies, mountaineers, hunters and anglers, cares for the liveliness of the place throughout the year. The House of Culture hosts up to one hundred cultural events and entertainments per year, in addition to sporting gatherings and matches held in the Sports hall. During the summer the Summer Castle Performances take place in the castele courtyard. Throughout the year there are homeland and travel lectures read in the Laško Library, as well as literary evenings and meetings with the authors held. The Laško Mansion houses a local museum collection, with occassional periodical exhibitions too.
The Laško spa (Wellness Park Thermana) often holds salon evenings with celebrity guests. The Laško area is famousfor its activity of nourishing and demonstrating traditional customs and farm work under the patronage of the "Možnar" Ethnographic Committee. Some traditional events in Laško: In spring the "Zeleni Jurij" folklore celebration ("Green George", a mask heralding the arrival of spring) is conducted by the school youth, in autumn the St,Martin's day (when must turns to wine) festivities are organized, in winter there is a New Year's party held in the open, whereas at the time of the Carnival the masked procession takes place.
The annual event "Pivo in cvetje" , a festival of beer and flowers , represents the pinnacle of entertainment in Laško, when the whole town for a few days turns into amusement grounds with top musicians and entertainers performing. The rich fireworks are, along with the traditional country wedding, parade of beer, flowers and traditional customs, considered both the fixture and the main attraction of the festival. 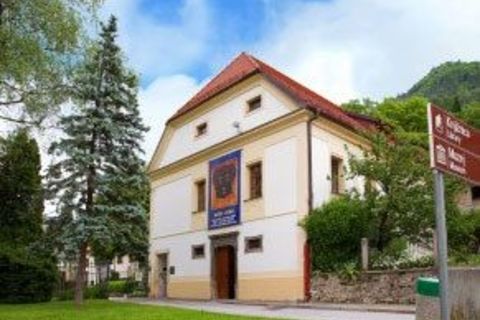 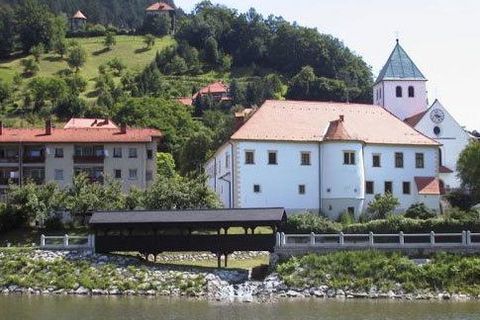 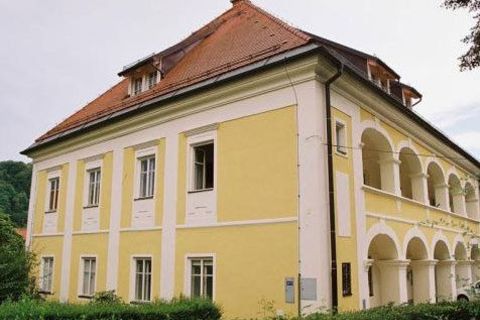 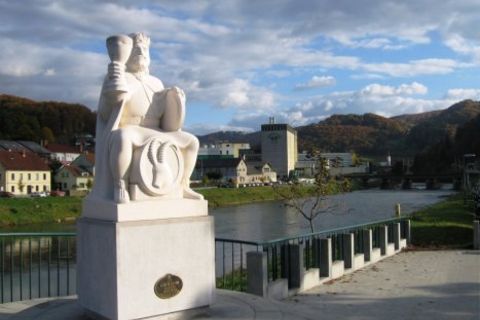